At the Center of the Universe
Essays on Western Intellectual Space
by Mordecai Plaut
This site includes essays on Jewish and general topics by Mordecai Plaut, and information about the book.

A new concept in children's literature! Basic concepts presented in simple, non-condescending terms that a child can grow into as he or she grows up. Start your child off with an understanding of the basic concepts of Judaism in a way that will never be outgrown.
In January 2019 I published a new edition of the Ibn Tibbon translation to Hebrew of the Rambam's Moreh Nevuchim.

Two Educational Systems - a discussion and comparison of Western education and Torah education as alternatives for developing a full person.

Reason and Random If the world is fundamentally random, it is not reasonable. It may not be unreasonable to suggest that the world is a result of random processes, but it is deeply hostile to reason itself. (From the book)

A Timely Note  Based on an analysis of the essentials of a measurement system, in particular a measurement system for time, this essay argues that the days mentioned in Genesis cannot be the same as our days. They must be measures on a different basis. It shows how the error of scientists is "reasonable," and does not really support any attacks on the Bible.(From the book)

The Scientist as Poet; the Baal Mesorah as Scientist Science, at its best, is poetic fiction - mythmaking. Torah is truth. (From the book)

Why the Rambam Would Not Recommend the Study of Modern Science A discussion of the differences between modern science and what was called science in the Rambam's day with a lot of attention to why modern science does not bring to love of G-d. (01/05)

What's Wrong with "The Passion"? It's not the Antisemitism; it's the Blood The real problem of Mel Gibson's movie is the blood and violence, not its attitude to the Jews. (03/04)

Is economic gain a universal drive? Is it reasonable to say that the world is the result of chance occurrences? Does the earth go around the sun? Can the world be only 5,763 years old? Can G-d's existence be demonstrated? Does humanism understate the value of humanity?

These are some of the topics discussed in the book, "At the Center of the Universe." See a review below. 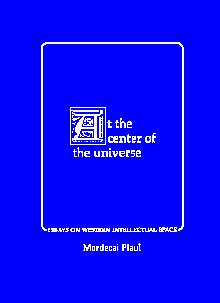 
The entire book is online and available at ResearchGate

At the Center of the Universe

Introduction: Where are We?

Notes on an Outmoded World View (The entire essay is online.)

The Rise of the Science of Economics and the Idea of Gain (The entire essay is online.)

How to Succeed in Knowing without Really Seeing (The entire essay is online.)

Reason and Random  (The entire essay is online.)

A Timely Note  (The entire essay is online.)

The Scientist as Poet; the Baal Mesorah as Scientist (The entire essay is online.)


From The Jewish Observer

This is a remarkable book, both from the viewpoint of contents and presentation. Rabbi Yaakov Weinberg, Rosh Yeshiva of Ner Israel, in his introduction deservedly calls it "a breath of fresh air," and the thoughtful reader will indeed find that it effectively disposes of a great many cobwebs in the popular mind.

In our modern age, because of man's achievements in exploring and making over his world, he has fallen prey to an extraordinary arrogance - a conceit that the ideas developed by the secular liberal movements of the last few centuries are not only sufficient for man but that they are the only ones that can claim rationality and deserve our respect. In truth, this attitude characterizes in large measure the popularizers, the media, the followers and the disciples. Philosophers themselves know the limits to which human reason can penetrate; scientists are aware of the limits of the scientific method; and psychologists encounter the pitiful victims of a worldview which leaves man adrift and alienated. But the popular mind still pays strident homage to ideas whose validity is highly questionable.

The last decades have seen the publication of writings that, in contrast, present our Torah value system and the concepts that should guide us and mold our lifestyle. However, Rabbi Plaut's book is unique in that it takes direct issue with a number of the most cherished beliefs of our age - and does so in a manner that must command the respect of his antagonists. He examines the popular notions according to the strictest standards of scientific and philosophical method - and, lo and behold, arrives at conclusions that instill a healthy note of skepticism about those notions and, at the same time, renewed appreciation of our approach to these fundamental issues.

The author deals with some themes which are commonly recognized as fundamental - such as the age of the earth, or proofs of the existence of G-d - as well as with questions that we would not readily encounter. What are the philosophical and psychological consequences of the adoption of the Copernican system? Can order be the result of chaos, according to scientific logic? Can the Mesorah's teachings be shown philosophically to be authentic knowledge? The author's ideas are brilliantly presented, the analysis is always lucid, and the writing elegant. The book is not easy reading, but whatever difficulties it presents are inherent in the subject-matter and not the presentation - which is both clear and persuasive.

This reviewer must admit, though, that he was not persuaded by the author that the Thirteen Principles of the Rambam were meant to be "the blueprint for a sound mind" and do not possess an "exclusive essentiality" - the Rambam's concluding words in his presentation of the Thirteen Principles in the Perush Hamishnayos would appear to indicate differently (pp. 139-147).

All in all, this is a volume that breaks new ground in applying searching philosophical examination to fundamental questions of human existence, and arriving at results that will make the reader see traditional Jewish teachings in a new light. It is to be hoped that it will find the wide circulation that it deserves, particularly among those involved in the intellectual ferment of our time.

The entire book is online and available at ResearchGate